Cooling water is widely used in all kind of different industries and or institutional applications to control its process temperatures and  remove excess heat  . Water has become a scarce and precious commodity that requires responsible utilization as such. Users nowadays take all kinds of measures to reduce its usage and to act as responsible as  possible towards the environment. 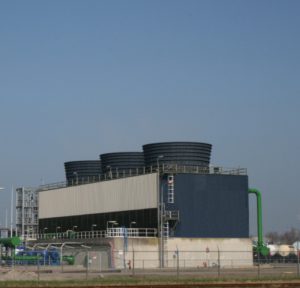 As such ,industries have undertaken various steps to reduce the amount of water required and have switched from once- through to/or directly installed  open recirculating cooling tower systems.

With the use of open recirculating cooling towers and the desire to reduce the amount of water used hence reducing  discharge levels  to the open waters, cooling water is being recycled over a cooling tower to such a level that the cycles of concentration are potentially causing all kinds  other issues such as ; corrosion , microbiological growth , scaling and deposition.

Next to the open recirculating systems , there are still industries that can operate with once-through systems . The source of water varies from location to location and so does the quality of water that is being used. Problems may arise from i.e. high iron content when well water is used or from sludge and dirt from river waters or mussels fouling from salt water use .

Another type of cooling methodology is the use of a closed cooling system.  A closed system is actually two interrelated systems , a completely closed system and a chiller/heat exchanger to remove heat . Unlike the prior mentioned two systems , the closed system has very little water loss and does not have similar issues  to the extend as the other systems . Typically  corrosion control is sufficient to ensure continuous uninterrupted operation.